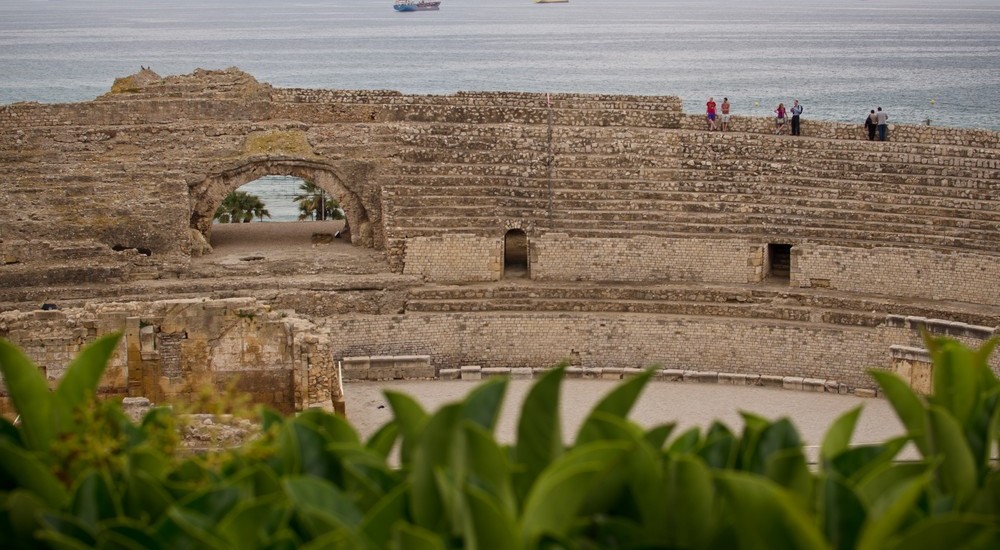 Just a twenty minute drive south of our campsite, Camping Gavina, we arrived at the ancient city of Tarragona. We travelled here to see some impressive Roman ruins on the coast. This second-century amphitheatre is still quite well intact today and is a UNESCO World Heritage site. The surrounding area is the oldest Roman settlement in the Iberian Peninsula and has more to offer than just an amphitheatre. The city also offers great sea views and the beaches are quite pleasant.

There’s a mercado / grocery store on the sea-side of the main road leading into the city where you could stop to make sure you’ve got enough snacks for a day of walking through the city. If you’re not on a tight budget, grab some good local food from the market, any of the little shops or a restaurant. Or do both, because half of travelling is about the food.

We found free parking just north of Platja del miracle near Forti de la Reina. You can also get into Tarragona by train or bus. The city itself is very walkable so there’s no need to have wheels to get around.

No one really knows who founded Tarragona. It could have been an Ethiopian pharaoh, back in the 7th century, or Phoenicians. In Roman times the city became quite built up because of its costal and hilly location. From then on, Tarraco belonged to some Vandals and then Visigoths. Like many important cities, it became part of different kingdoms over the centuries, changing hands often.

We started our exploration south along the beach front and then turned right towards the Moll de la Costa and Moll des Pescadors to see the harbour and port area. Next we headed right into the city towards Plaça de la Imperial Tàrraco and then back to the coast via Rambla Nova. This is where farmers and artisans were setting up their wares for the market. We found a little restaurant down one of the alley ways; Cafeteria Olivier where where we had a reasonably priced lunch served by friendly staff.

The next stop was the Roman Amphitheatre, Provincial Forum and Pretorian Tower (these are museums, but the entry fee isn’t too steep). From there we wondered into the old city and found more scattered Roman ruins and the cathedral.

If you’d like to be guided through this sunny city, here’s a link to a Google Maps route that I’ve put together for you here to make sure you don’t miss anything. The 5-kilometre walk will take you through the following sites:

✔  Amfiteatre de Tarragona: Right on the Via Augusta, there is an entrance fee to enter

✔  National Archaeological Museum: A great collection of ancient objects found in the area

✔  Portal de Sant Antoni: A monument gate that was built in 1737

✔  Catedral de Tarragona: This site previously used to be a Roman temple, Visigoth Cathedral and later, a Mosque

✔  Passeig Arqueològic: This is where you can get a glimpse of the Roman walls

✔  Necròpolis: As this is part of the Paleochristian Museum with an entrance fee of €4.50

If you have the time, drive out to see the 4 kilometre long Les Ferreres Aqueduct or Pont del Diable. This Roman-built aqueduct used to supply water to Tarragona and is in great condition. It’s just a 10 minute drive inland from Tarragona’s city centre. Happy travels!