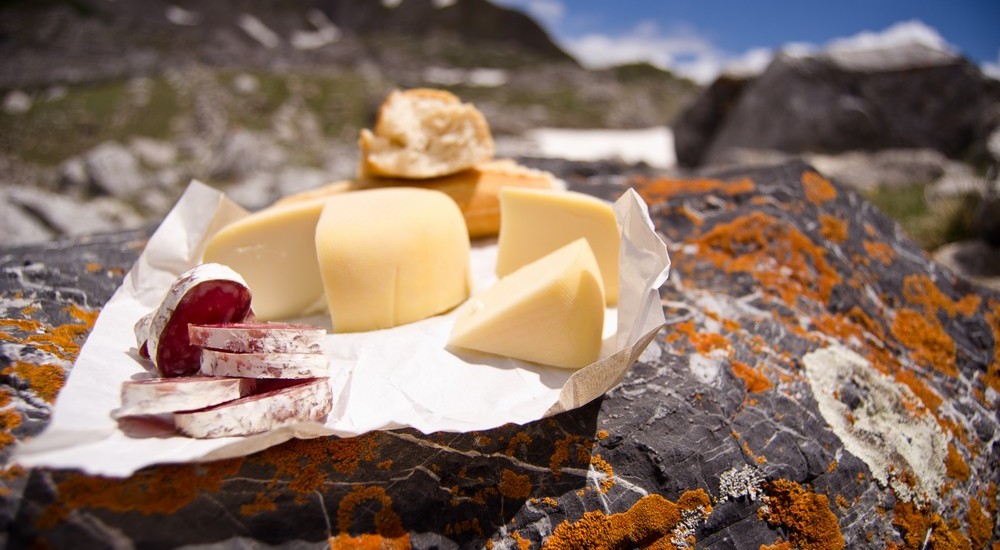 Between France and Spain, a beautiful mountain range joins the Atlantic to the Mediterranean.  The first time I went to the Pyrenees was back in 2008, for a spontaneous weekend camping trip. Already much in love with France at that point, I was delighted with the discovery of this landscape. I didn’t actually know that the Pyrenees were even there before because I had my sights set to the north, Paris. And after that trip, I didn’t go to Paris for at least another eight years. The reason why, is simple. The lesson learnt was that less travelled paths are more often than not, much more rewarding.

Now to be honest, on this particular trip we weren’t camping in the Pyrenees. We wanted to get to Spain, south of Barcelona, to the next campsite. So, we were just passing through but we made a day of it. If you find yourself crossing the mountains, it makes sense to pack a picnic, change into a slower gear and take in the views as you go. Stop often and breathe in the mountain air. Maybe you could even fit in a short hike.

The Pyrenees are blanketed with snow in winter. In summer, they’re fantastic. Colourful high altitude flowers bloom, cows and sheep dot the green and rocky landscape. Hidden behind peaks, you’ll discover small turquoise lakes and endless views. In circular valleys, waterfalls tumble. It’s very easy to feel like you’re in the middle of nowhere. The highest peak stretches up over 3000 meters and is often white with snow late into spring. This description might make you think of the Alps, but the Pyrenees are actually older.

There aren’t many dangers in the Pyrenees as far as wildlife goes. You won’t even see brown bears. They were recently brought back into the area after being hunted to extinction. They number under 20 so spotting one would be a rare sight indeed.

There are a few small, rural towns in the mountains where you can stop for supplies. It’s definitely a good idea to get everything you need beforehand though because the whole area is very remote. Some of the towns are centred around historical hot springs, like Eaux-Bonnes.

If you’re just passing through en route to Spain, the roads are quite twisty and slow but in good condition. There aren’t any tolls here although there are a few tunnels.

The west side of the Pyrenees is wetter than the south (the whole of France is generally rainier on the Atlantic side). As a result, the west is also more woody than the east. Don’t count on good weather though, because this area has fast-changing weather. Microclimates mean you need to be prepared. If you drive thirty minutes in any direction you’ll probably be in a different season.

“struck by Herculean voice, the mountaintops shudder at the ridges; he kept crying out with a sorrowful noise ‘Pyrene!’ and all the rock-cliffs and wild-beast haunts echo back ‘Pyrene!’

The name of this mountain range comes from Pyrene, a princess in Greek mythology. The myth about Pyrene and Hercules is fairly shocking and sad. There could be another origin of the name, which isn’t much better. The story goes that an ancient Greek historian claimed that the whole area was once burnt, resulting in a massive multi-day fire. The word Pyrenees then would have links to the English word we have today, pyre, and from the Greek word for fire, pur.

I’m always on the look out for the weird and unexpected. One of the strangest things I’ve seen in these mountains is the hedges. Someone quirky or creative decided to trim a bunch of hedges into square shapes on the side of one of the roads. There’s not much else around. I imagine some odd Frenchman somewhere getting a kick out of surprising passersby with his strange habit. If there’s a story behind this strange occurrence, it’s one I don’t know.

Are you heading into the wild soon? I highly recommend the Pyrenees. There is a lot to see and many paths to hike. There are various routes across the whole length of the mountain range. To do the log distance walk, you can take the GR10, GR11 or HRP. Each route is over 800 kilometres or so. Doesn’t that sound like a cool thing to do?