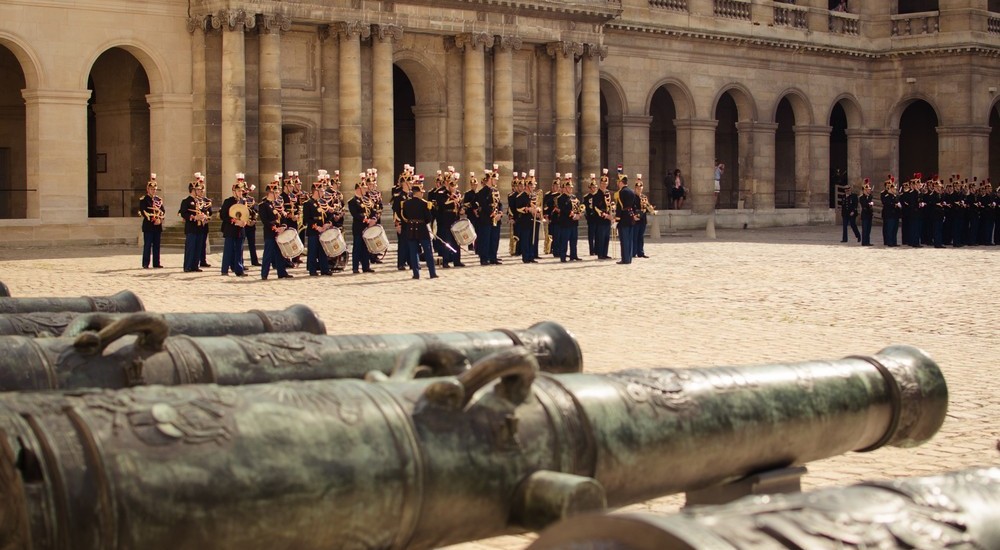 I love learning about the world by examining the fascinating history of intricate objects from different eras. However, when I’m just visiting a city like Paris for a few days , I prefer to be ambling around outside or exploring green spaces. The only reason I ended up in this museum is because my husband really wanted to see it. We sort of bumped into the Musée de l’Armée while exploring the area around the Eiffel Tower and decided to come back another day.

To get to the Musée de l’Armée we took the metro to the Invalides metro station. The museum is located right at Les Invalides in the 7th arrondissement. If you use Google maps, here it is on the map. We explored the wonderful architecture around the complex here before heading on to the museum. Also known as the Hôtel des Invalides, Les Invalides is a rather large complex that includes a chapel, catherdral, three museums and monuments relating to everything military. The museum’s unromantic name points to its function: it used to be, and still is (in part), a hospital for soldiers and veterans.

Inside the Army Museum

Over a hundred years ago, back in 1905, the Musée de l’Armée was formed. Today the museum boasts over 500 000 unique and interesting artefacts that span from ancient times right up until the end of The Second World War.  The museum is split into different areas and sections with different displays. The main courtyard area contains dozens of French cannons and if you’re lucky you might catch a special event. A marching band was running through some drills while we were there.

My favourite part of the museum was probably the rooms with the most intricate ancient objects. The museum’s extensive collection of artefacts from many centuries back, makes it one of the top three arms museums in the world. This wasn’t wasted on me (not that I’m pro-war or anything);  I amused myself with admiring careful craftmanship and beautiful decorations and patterns on a variety of weapons from the 13th – 17th centuries.

The more modern parts of the museum were less interesting to me. These include the Modern Department with uniforms, weapons and warefare equipment from the times of Louis XIV and Napoleon III. The Contemporary Department zoomed in on details from the World Wars.

If you’re thinking of checking out the museum, go and have a marvel at the symmetrical architecture first and potter around the outside until you’re tempted to go in. And then do; you’re sure to learn something new. Generally, the adult admission fee for the museum is €11 and it opens at 10:00 and closes at 17:00 or 18:00 in the warmer months. The unemployed, under-18’s (or under-25’s if from the EU) and disabled visitors can enter the museum free of charge.