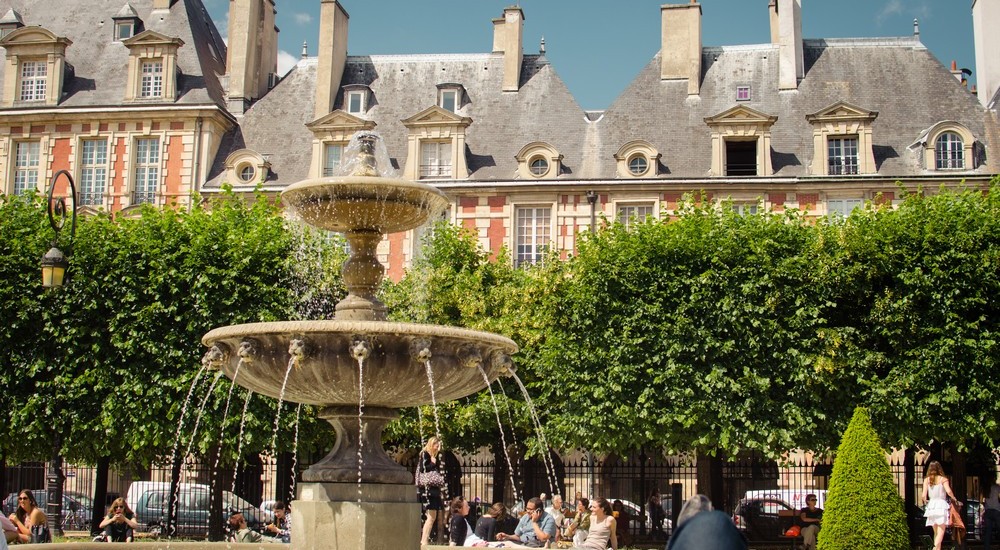 On the north side of Paris, over on the Rive Droite,  you’ll find a funky neighbourhood that spans the third & fourth arrondissement: Le Marais. Today Le Marais area hosts a large Chinese community and is known as the centre of LGBT culture in Paris. It’s also filled with art, beautiful buildings, green squares and cute cafés. The area has a history of  being one of Paris’ more uppity-chic areas. The French word marais actually means “marsh” or “swamp”. It doesn’t sound very upper class, does it?

Back in the days of 1240, Paris was a lot smaller. The Knights Templar, a powerful catholic military order, decided to build a fancy fortress just outside the cities border. The surrounding area was named after the landmark and called Temple Quarter. The fort stood there for a good few years and parts of it were even used as a prison during the French Revolution. Eventually it was demolished (only about a century or so ago). Today the site of the temple is a garden known as Square du Temple (get a map).

And so it began. The temple fortress was the start of the aristocratic history of Le Marais.  Not more than a hundred years later, the King of Naples and Sicily, Charles I of Anjou and King Charles V of France (The Wise) moved into the ‘hood. In 1605 the Royal Square (today’s Place des Vosges) was designed and the area quickly became a very popular and affluent hangout. French nobles started building their mansions here and as a result you’ll find many of these hôtels all over the place.

After the French Revolution, it wasn’t as fashionable to be rich. The Temple Quarter became more commercial and Jewish communities moved in. Things started changing quite fast in the last century and mostly as a result of the World Wars, the district lost its shimmer and became a working class area. However, over the decades the hôtels were slowly restored and some of them were turned into museums making the Le Marias a great place to visit – especially if art is your thing!

To see some of these cool, classical museums check out these converted hôtels:

Another notable and beautiful building is the Agoudas Hakehilos Synagogue. It was designed by the same Art Nouveau architect who designed the famous flowy metro stations and is filled with his creations. The synagogue was completed in 1913 and is a historical monument today. Check out Hector’s other buildings over here.

One of the most famous museums in the area is the Centre George Pompidou (the country’s national museum of modern art). It was completed in 1977 and certainly is quite retro (see below).

Who’s Georges anyway? Georges Jean Raymond Pompidou was Prime Minister of France from 1962 – 1968 and he later became the president too (he died while in office). His efforts were centred around restoring foreign affairs and making Paris more modern through developing an expressway on the Rive Droite, building a modern art museum, modernising structures (Les Halles) and building new ones.

If you’re planning on visiting Paris, visit Le Marais and let me know what gems you find!