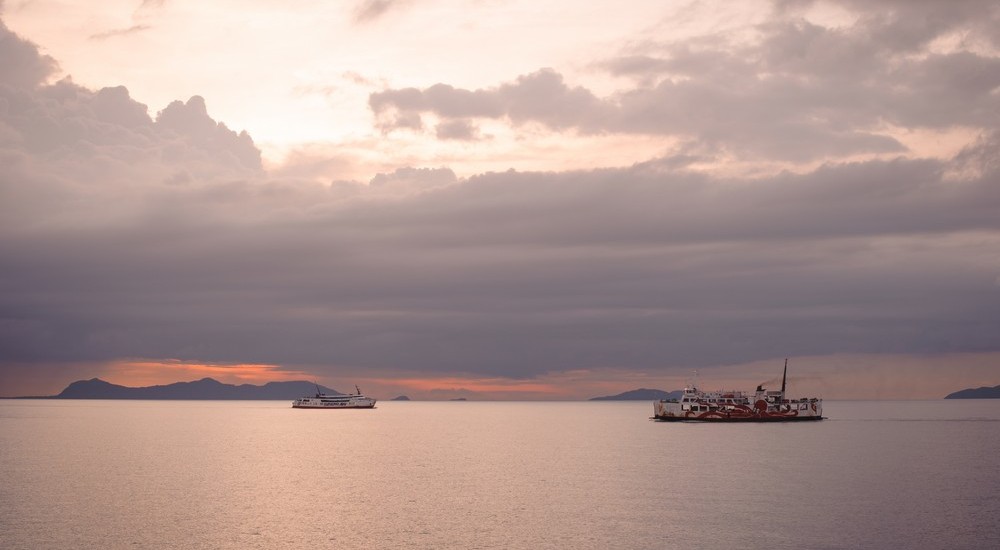 For newbies to Thailand, I would describe Ko Samui as a pretty, tourist island on the south of the Gulf of Thailand. Expect coconut trees, calm bays and that clear seas. That clear water that you see in postcard photos. The island is particularly touristy in summer is because it’s toasty hot, humid and sunny in August while it is usually monsoon season everywhere else nearby. When travelling to Ko Samui from Bangkok, there are a few options. The most direct and more expensive option is to take a Bangkok Airways flight from directly to Samui airport. These flights operate from Suvarnabhumi Airport (BKK) on the south-eastern side of Bangkok and take about an hour and a half.

If you’re a budget traveller that just landed in Bangkok after a long layover, you’ll mostly likely need to get some sleep in a nearby hotel before navigating to your end destination. Travelling to Ko Samui and the islands in the south could take up the most part of a day! You could get a bit of shut-eye in the taxi, plane, shuttle and ferry though.

When you book with AirAsia, you only book and pay for one ticket from Bangkok to Ko Samui. It is essentially three tickets. The fee includes a flight from the Don Mueang Airport (DMK) to Nakhon Si Thammarat Airport (just under two hours), the shuttle service to Donsak Pier in Surat Thani (an hour and a half) and then a Raja Ferry to the islands (two and a  half hours). It’s not always obvious where to go or what constitutes an AirAsia organised shuttle/bus so stay aware of of where other people that are travelling a similar direction are doing, and follow the staff’s instructions en route, and you’ll end up in the right place.

If you’re a Google maps fanatic, like to know where you are or where you’re being driven to, you’ll need a reliable local internet connection. The first thing on your shopping list should be the TDAC Happy Tourist sim card with unlimited internet. You can top up the card after 7 days. They cost 299 THB and you can pick them up in any 7-Eleven or even at the airport (I know for sure that near the taxi service in DMK Airport there are various mobile retailers).

You can hail your own taxi or if the airport has a taxi desk service, they’ll get one for you. To avoid being scammed, ask your taxi driver to use the meter. One taxi trip we did was in peak traffic from the north to the south of Bangkok which took an hour and a half. It cost us about 350 THB not including the “highway”. The “highway” is basically just toll gate fees. There are quite a few of these around the inner city as an attempt at deterring traffic. Toll fees can be between 50 THB and 70THB. The driver will ask you for cash as he gets near the toll gate and should always give you the receipt and change.

If you’re ever staying in a hotel and need to get out to an airport quickly, get the hotel to organise a taxi for you. They’ll often give you a flat rate offer at the reception desk that includes the toll fees (something like 500 THB for 30 minute journey). You’ll probably notice a difference in speed when you pay a flat rate.

I’m pretty certain that even these prices are a little over the top, but they’re still a fair bit cheaper than any given taxi in Amsterdam or Dublin. I’ve heard you’re supposed to bargain for everything in Asia, but I didn’t really bother with that much to be honest.

AirAsia flies out from DMK in the north of Bangkok to the southern islands, so don’t go to BKK airport by mistake. Once you’re there you’ll have to find the national AirAsia departures area which isn’t that clearly marked as “national departures” (VS international). In my personal experience however, I found the the staff to be very helpful.

Next, you’ll have to find a self-service machine and use the QR code sent to you via email to print your own boarding pass and baggage sticker before checking your bags in. Make sure that you print the right boarding passes. Learn from my mistakes: I initially printed the pass for my return instead of my departure and only noticed when I was in the bag check-in queue!

Nakhon Si Thammarat Airport is really easy to navigate since it is even smaller than Cork Airport. When you arrive, go to the small AirAsia desk and show them your tickets to Samui. The staff will then put a sticker on your t-shirt which counts as a pass of sorts. They’ll tell you roughly where to stand to be collected by the shuttle or bus. We got driven across in a van with space for ten people and their luggage. We all fitted into the van rather snuggly and enjoyed the hour and half road-side views of green banana leaves, roaming cows, shops and homes. I was thrilled to get out the van without a neck-ache (the driver wasn’t very gentle with his speed management). At the Donsak Pier Port, you’ll have to head over to another AirAsia counter to be given your last ticket and the pier number for your final leg of the journey. In my experience, Raja Ferries can leave really promptly or even a little early, so don’t sit around gawking at the pretty views.

I caught 3 different Raja Ferries on my trip and every one was different. One had open decks, one had a sheltered deck with a really loud engine noise. Some of them are painted with strange designs like giant octopuses and only have eastern-style bathrooms (with no toilet paper). They all sport a plume of black smoke, all have an air-conditioned area and a little shop selling essentials like Lays and cooldrinks.

GETTING TO YOUR ACCOMMODATION

Sometimes I do crazy things to save a few bhat. This time it was apparently a great idea to try and walk to the accommodation at night, along the beach… with dogs on it. I don’t know what it is with the sweet, lovely dogs of Thailand. They turn into noisy territorial attackers at night. The same thing happened to a friend in India: one morning she woke up really early to go for a walk and the chilled-out, cute dogs of Rishikesh ganged up on her and she had to climb up onto a car to escape their persistent barks. Anyway, just take a taxi if you arrive at night. Your longest taxi drive on the small island of Ko Samui will probably be thirty minutes. To put it into perspective, the ring road around the island is only 50 kilometres.

It is a long journey but you’ll be there before you know it! Plus, it is really scenic. You’ll get to enjoy a variety of stunning views from the air, up-close o the road, and from the sea en route. It helps to think of it as a day-outing rather than just travel time. If you’re going to be doing this journey soon, I hope you have an amazing trip and are blown-away by the beauty of this special country.