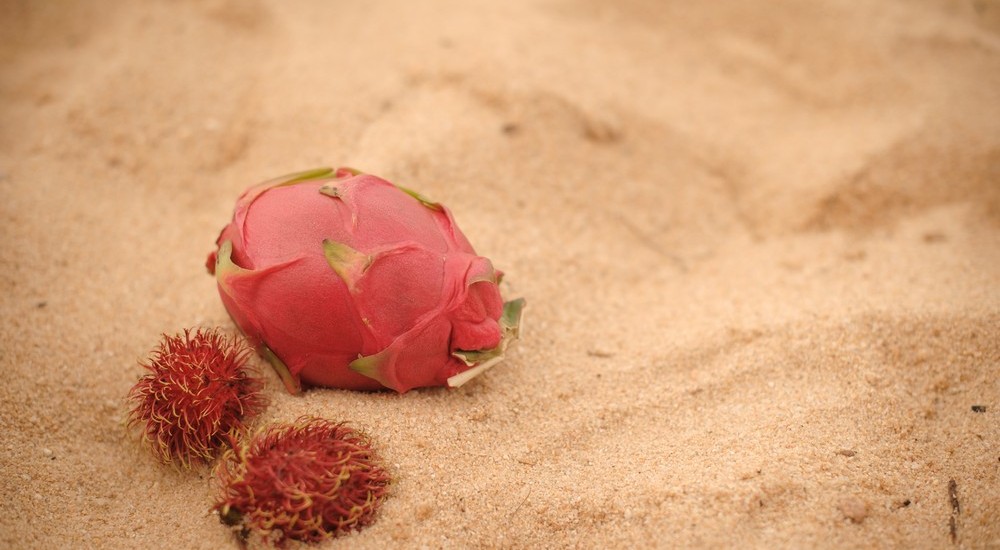 One of the topics that people will always bring up when you mention a trip to Thailand is the food. And for good reason. Not only is eating out affordable, it is also absolutely delicious. The variety of food found in restaurants, sold at markets and on the streets is staggering. You’ll always be able to find space to try out something new and it most probably will be something to write home about! I realise I’m writing like someone who’s a seasoned Thai traveller, but in reality I can only speak for the islands in the south of the Gulf of Thailand – and if that is anything to go by then I’m sure a culinary tour of Thailand would be any foodie’s dream.

With touristy dishes like Tom Kha Kai and Pad Thai aside, let’s focus on the amazing fruits. Buying fruit in Thailand is always a good idea. If you’re concerned about any germs or bacteria from travelling or washing water, don’t be! Most fruit in Thailand is protected by a peel which means it’s going to be perfectly fine anyway. Fruit in Thailand is plentiful, cheap and more often than not, strange-looking to a Westerner’s eyes. A fruity meal is a fantastic way to recharge, get loads of good nutrients and to re-hydrate in the heat. Fruit can be really filling too.

First up of the amazing tropical fruit of Thailand, we have the longan. This fruit looks a lot like a lychee and needs to be peeled. Similarly, they are sweet with a big pip inside, but not as messy as a lychee. You can buy them from roadside fruit stalls in bunches. These guys look totally different to the longan but once peeled they are also reminiscent of a lychee. With a big pip surrounded by sweet, soft, translucent flesh, they grow on evergreen trees. The weird looking peel turns reddish as they ripen. I found that the woody outside of the seed often gets stuck to the flesh and puts a bit of a dent into the culinary experience.  Surprisingly the seeds can be cooked and eaten too! The first time I saw a few of these neatly packed into a basket in a hotel, I thought it was a fake wooden fruit (which is funny and also embarrassing) . They are in fact very real and ridiculously delicious. Once you get past the waxy and tough purple flesh, you’re faced with segments like an orange. Except, they’re white like a kind of soft lychee with big pips inside. The taste is quite difficult to describe but it’s all very tasty. Also known as pitahaya, this fruit looks a bit like a kiwi when it’s cut open because of the little black seeds inside. You can slice the fruit up with a knife or scoop up the soft, white flesh with a spoon. I found that the seeds were even less noticeable than in a kiwi and that the dragon fruit is also nowhere near as tart as a kiwi.

Dragon fruit grow on a kind of cactii and that means that the flowers bloom overnight and rely on bats and moths as pollinators.  The outside of the fruit is completely soft and super bright. In my opinion, they’re probably the most beautiful fruit ever! In South Africa (where I’m from) there’s mainly one type of mango: the blushy one. In Thailand, the mangos look less fancy but I honestly think they taste better! The yellow mangos are often sold at fruit stalls or at restaurants with sticky coconut rice (the dish is called Khao Niew Ma-muang). That said, when I realised that there are over 400 mango varieties, I’d like to point out that none of us are going to easily qualify as mango experts. Just try the yellow ones anyway.

Don’t be disappointed when you order a mango salad like Yum Pla Duk Foo (catfish with mango salad) and there’s no yellow mango in it. I think the yellow mangoes are saved for sweet desserts and green mango is the one used in salads. It doesn’t really taste like a good, ripe mango (it’s not as sweet and is crispier almost like a vegetable) but it’s not too bad. You know you’re on a tropical getaway when you’re sipping on a young coconut with your feet up and some warm waves lap the shore nearby. If there’s a coconut palm above you, don’t let the coconuts fall on your head! These re-hydrating and exotic fruit need to be skillfully opened with a crazy-dangerous knife. You can get them, ready cut, at almost any restaurant for about 70 THB. Once you’ve had a refreshing coconut water drink, use a spoon to scoop up the coconut flesh inside. It makes quiet a good meal. The popular pineapple hardly needs an introduction. What you might not know about pineapple is that is an excellent source of manganese and vitamin C. In Thailand, you can find them everywhere: served in pineapple fritters or in smoothies and often hand-carved on the beach (this touristy experience costs you about 50THB). This fruit looks a bit like some kind of cooking apple but tastes like a guava. With origins from Central America, the farang is crispy and light. It’s named after the fact that it’s not local: farang is the Thai word for foreigner.

Am I recommending that you try durian? I’m not sure. I wasn’t particularly brave in this regard but maybe I should have persisted a little. Durian is really popular in Thailand. It’s a flavour used in everything, even ice cream. A rather bold move, considering how disparaging people can be about it. It really stinks. And it tastes disgusting too – an acquired taste they say. I’d just like to warn you that the after taste lingers and it is illegal in certain public spaces because of the stench.

If you’re bent on trying this daring fruit choice, apparently the best way to intiate yourself is to start with dried or dehydrated durian.

On one occasion I was offered a complimentary red cool drink that was introduced as “Roselle juice”. This fruit is from a species of hibiscus and grows in West Africa and further afield. Apparently it’s also enjoyed in Australia. In other parts of the world, people use it to make jellies and all kinds of sweet eats.

Even though I sampled and enjoyed a bunch of glorious tropical fruit in Thailand, there is a lot I missed out on. Here are some interesting looking fruit that I’ll be trying next time:

Snake fruit / Sala: A weird looking fruit that looks most like crispy longan

Sapodilla / La-Mut: Looks a bit like a mango but can be described as “fig-like”

Langsat / Lang-sard: A mix between a mangosteen and a lychee, this one tastes like a grape

Custard apple / Noi-Na: Tastes like custard, but is an apple

Pomelo / Som-O: Grapefruit crossed with an orange, not overly juicy

Santol / Gratwrn: Sweet and creamy, looks like a pear

Jackfruit / Khanoon: A massive fruit that can weigh up to 35kg, smells like pineapple and banana, can be eaten raw or fried in a batter, not to be confused with durian (!)