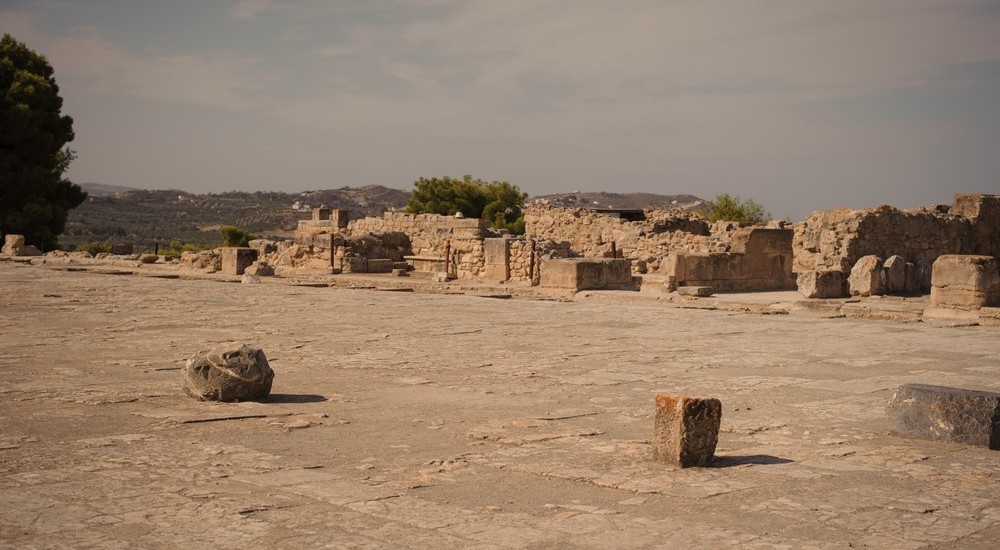 While we were staying on the south of the island of Crete, closer to the Matala Caves and the Preveli Palm Forest, we drove a short distance inland to see the ancient ruins of Phaestos. These ruins are situated on a hill with far-reaching views (we decided to have our little picnic lunch in the parking area because the view was so good).

What to expect at Phaestos

In summary, the Minoan’s were a group of people who formed a matriarchal society and settled in Crete a very long time ago. They formed the city of Knossos. Situated in the north, Knossos used to be the capital of Crete in the Minoan days. Since the site was inhabited since about 7000BC, it may even be Europe’s oldest city. The city of Phaestos was the second largest city in Minoan Crete and the area may have been inhabited from 4000BC. Invasions and earthquakes probably devastated Cretan cities and palaces until around 1300BC when the civilisation ended.

There were about 10 other people exploring these very ancient ruins on the day we explored the remains. That made it a relaxed experience – unlike Knossos. It takes about 2 hours to explore the area and read all the information signs. I was impressed by the beautiful staircase and the spaces where massive pillars once stood. A few decorated pots and jars where also found on the grounds. But, the most well-known treasure from Phaestos is the undecipherable Phaestos Disc.

The clay disc was discovered in 1908, carved with 242 characters of a hieroglyphic script. The characters are easily familiar but seemingly random, to me at least. You can see a man with a mohawk, flowers, a comb, manacles, a woman etc. Get a good view on this fascinating artefact over on Wikipedia. To see the real thing, you’ll have to travel north to the Heiralikon Archeological Museum.

Travel tip: In terms of facilities, the ruins have a touristy museum shop, bathrooms and some food options. The entrance fee is about €8 per person.