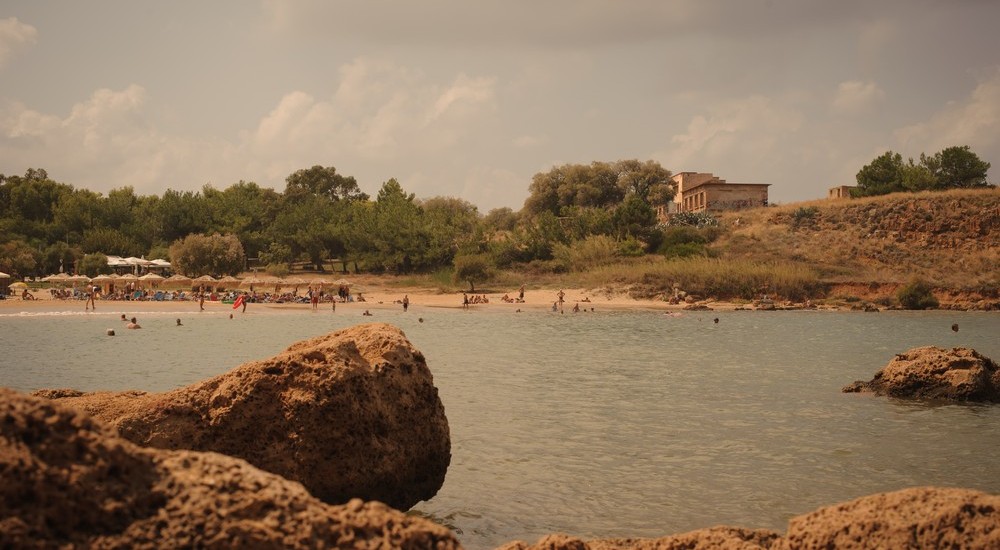 After a really good night’s sleep in Chania, we woke up fairly early planning to go to a beach for a swim. There is one small beach behind the walls of the Venetian Harbour (at the Guardhouse), but it doesn’t look like a very good swimming beach. It is a very rocky and full of pebbles beach. There are a few better, sandy beaches to the west of the city. So in the hopes of visiting them all, we aimed for the furthest one. It didn’t seem that far. It was only 5 kilometres away, but it took all morning to walk there.

It took all morning to walk there, because we took our time and stopped many times along the way. The first stop was for a cup of coffee (sketros, without sugar) which took about a half an hour. As it turns out, ordering traditional coffee in Greece can be a little bit complicated. I think this is because of the way that it is made: the sugar is added while the coffee grounds and water are being brewed on a stove, not after. With these 4 words, you can usually end up getting the kind of coffee that you’re looking for:

Metrios: Black coffee with a single teaspoon of sugar

Glykos: For sugar lovers, this drink has 2 teaspoons of sugar added

Variglykos,: The sweetest and strongest coffee you can get

If you’re in the mood for something cold, you can use the word freddo. Then specify it it’s an espresso or cappuccino that you’d like.

Table service can be quite slow here, which is different to what one might experience in certain other parts of Europe or areas of the U.S. A restaurant sign I saw read “no stressing, no pressing”, so if you’re in a rush, rather ask for takeaway. However, if you enjoy spontaneous conversation with the locals, choose to wait around for your coffee. I did both, I waited about 15 minutes before deciding to ask for a takeaway coffee. In that time I learnt that the owner of the café, who was on a break and just relaxing (while I was standing around waiting for my coffee), owns an orange grove. It’s the fresh juice from these oranges that brings all the regulars over to the café for a fresh cuppa OJ every morning. With some strong coffee in hand, we walked on along the coast, past a small harbour and to the first beach. This wasn’t the best looking beach we’ve ever seen (maybe we’re a little spoiled as South Africans). The next beach had a better vibe about it and also had two food options (we hadn’t had breakfast yet). We sat down at a small café somewhere over here, under tamarisks, with views of the waves. We tucked into Greek salads (€4) and refreshed with some water. This spot was owner by a lovely old man who couldn’t speak any English, and was one of the best spontaneous meals we had in Crete. Although, to be honest, we were never really disappointed as all the food here is really delicious.

The next beach area was filled with resorts, loungers and umbrellas (this adventure was turning out to be a bit of a beach hike). After that we came to a long stretch of beach dotted with pebbles. A path from the beach lead us through pine trees and to a shrubby landscape with beautiful sea views. Eventually, we found what we’d been looking for. Iguana Beach is a lovely little cove, protected from wind and waves. It’s a sandy beach, with some rocks below the water. You can take your snorkel and head out for a swim but I’m not sure what you’ll see (it looked a little murky). Probably not much (we forgot to bring out snorkel gear!).

If you prefer to stay on dry land, head out to explore the caves and sea arch nearby. Try to spot the red clay near the shore and leave a cave painting behind in the cave just for the craic.

There’s also a little copse of pine trees next to the restaurant on the beach that offer some soft shade. The restaurant itself is very convenient. The Greek salads are nice (€5.50) but the chicken salad had some weird meat in it (some strange canned chicken, at a guess). The frappés they make are really worth trying though. Frappé fanatics will be pleased to know that there are different variations that can be ordered in Greece. Most often, frappés are served without milk (really just iced coffee). If you’d like milk (gala) or cream (crema), it’s best to ask. On our exploratory adventure, we also found a ruined building nearby that was decorated with bright colours and funky pieces. It was safe enough to go inside and explore the walls and the many works of art. Treat Yoself to a Sunset Dinner

On the way back to our little apartment, we stopped for an impulsive dinner. As the sun was almost setting on our walk back to the old town, we sat down on the pier and tucked into a seafood platter for two (€38), with half a litre of white wine (€4). It was a really relaxing way to end the day! And just as well, because the following day we planned to step it up a gear and hike Samaria Gorge.