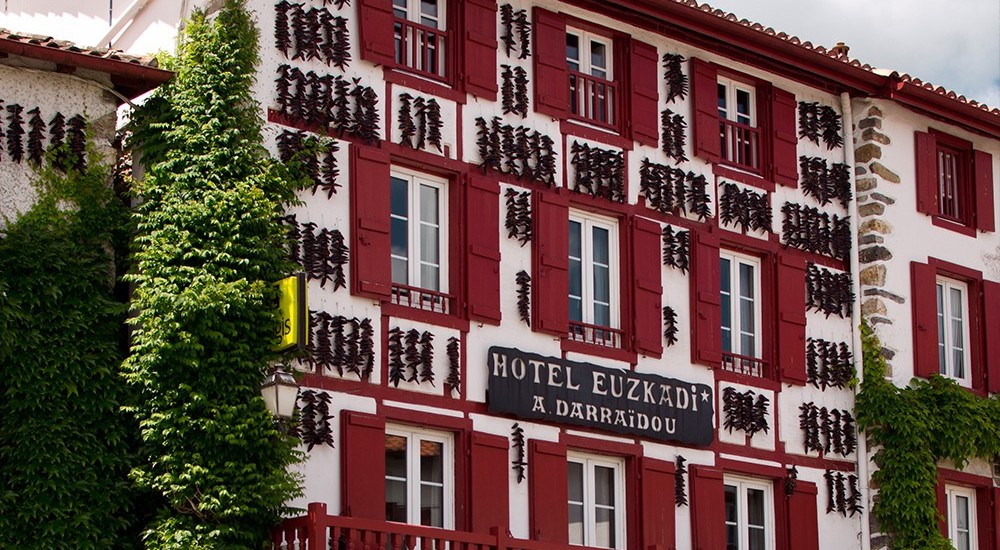 After a day trip to Bayonne, we decided to venture onwards to check out more southerly places like Espelette. If you read my Bayonne post, you’ll know that a paste made form the peppers is used in the curing of delicious Bayonne ham! This is a foodie adventure.

You guessed it, the peppers are named after the town of Espelette. The peppers are dried outside many of the houses and shops in the town, making for a very picturesque scene. They’re usually crushed to make pastes and powders that are really popular throughout the south-west of France, and further afield. Even though the peppers are protected by AOC, they do of course come from South America! This particular pepper was introduced into France about five hundred years ago and was used for its health benefits at the time. It later became used for curing meats and eventually became so popular in daily cooking that it overtook black pepper. That should give you a clue as to the hotness of the pepper. It only reaches about 4 000 on the Scoville scale – possibly about as hot as a jalapeño.

What to see and do

On the way into the town, stop over at the little Espelette Pepper Workshop filled with everything Espelette-flavoured. You might even get to see the peppers growing in the fields. The peppers are harvested in summer and the pepper festival, Confrérie du Piment d’Espelette, takes place on the last weekend of October every year. Apparently it’s really popular so expect crowds. We visited the town in early June so found the place to be pretty quiet.

From here on head into the town to admire the traditional whitewashed houses with red shutters, decked with strings of drying red peppers. Keep an eye out for the castle and sixteenth century church, Saint-Etienne.

I found the graveyard nearby the church the most interesting.  The older graveyard was filled with disc-shaped tombstones that remind me of the high cross or celtic cross. The stones are fashioned in the traditional Basque style, sometimes decorated with a traditional shapes and symbols that you might see throughout the region.

If you’d like to have a picnic in the town, there is usually a market on a Wednesday which should provide you with plenty of options. Alternatively, pop into Spar and the other touristy shops for more options.